One LA Secures Commitments from City and County Candidates 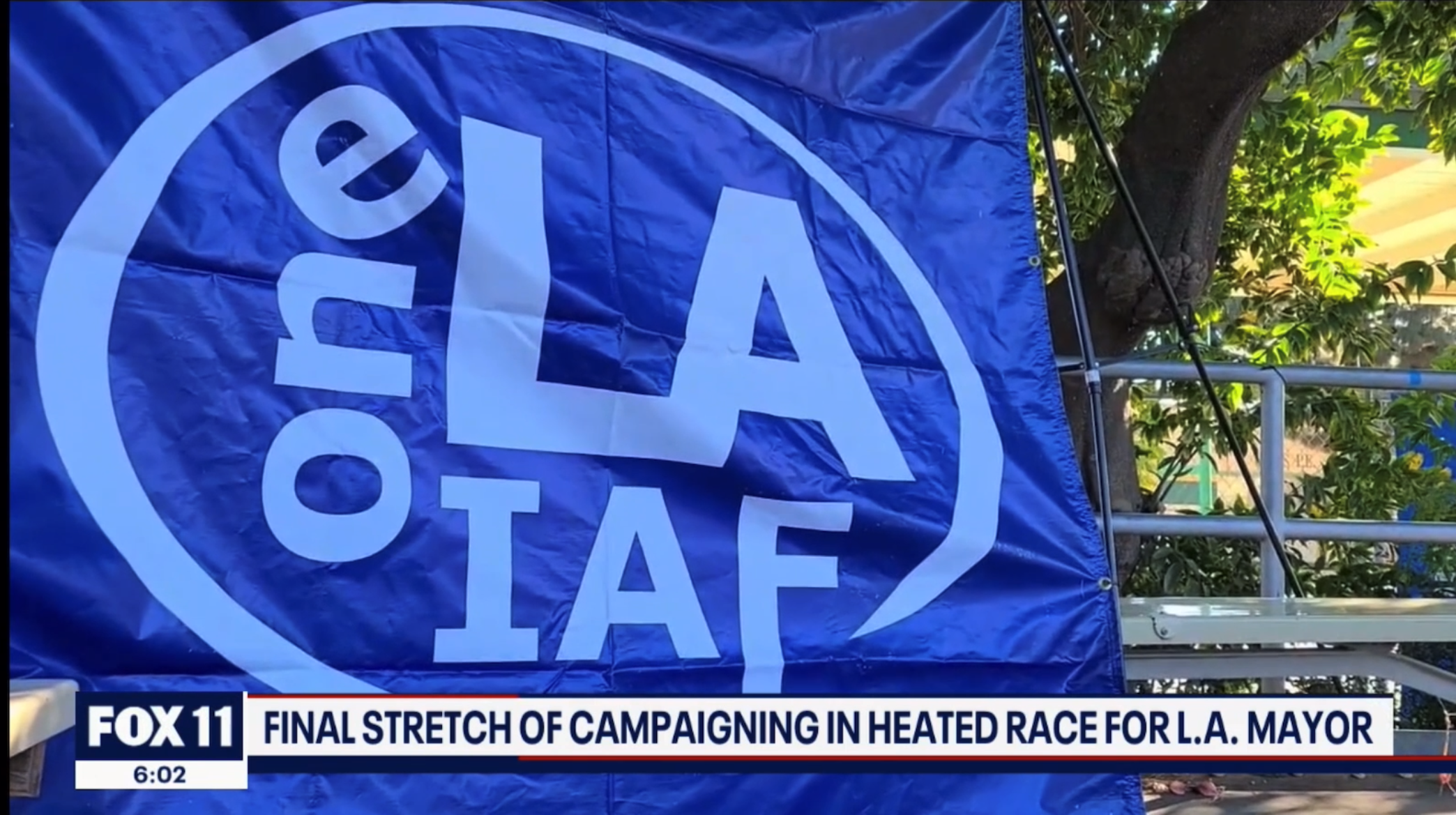 One LA-IAF, a broad based organizing group in Los Angeles, received commitments from candidates running for Mayor and County Supervisor to work together on issues of affordable housing and mental healthcare access.

Los Angeles, CA --- On Sunday, October 23rd faith and community leaders from the broad-based, nonpartisan organization One LA-IAF gathered at Northridge Middle School in the heart of the San Fernando Valley. The public assembly was held two weeks before the general election and invited candidates for the Mayor of the City of Los Angeles and for County Supervisor, District 3. Candidates Karen Bass, Lindsey Horvath and Bob Hertzberg attended.

In stark contrast to the zero-sum politics of Los Angeles City Council, One LA leaders from all corners of the county (South Los Angeles, the Westside, the Eastside, the San Fernando and San Gabriel Valleys) came together to present a common agenda that cut across faith, race, and geographic lines. The agenda focused on affordable housing and mental health care access.

One LA-IAF highlighted the overlooked opportunity to maximize the amount of affordable housing built on the publicly owned land on Metro projects. Desmond Faison, of NoHo Home Alliance, challenged the candidates to think about the current project in North Hollywood, District NoHo. “Failing to create a significant amount of integrated affordable housing on public land is inconsistent with Metro's policies and a huge missed opportunity to create an affordable community at one of the busiest public transit hubs in Los Angeles.” The median income of the area is $48,000 yet only 20% (or 300) of the 1500 units of the project will be affordable units and will be segregated from the market-level units. This number is well below the project's original proposal and Metro’s current standards of 100% income restricted units. 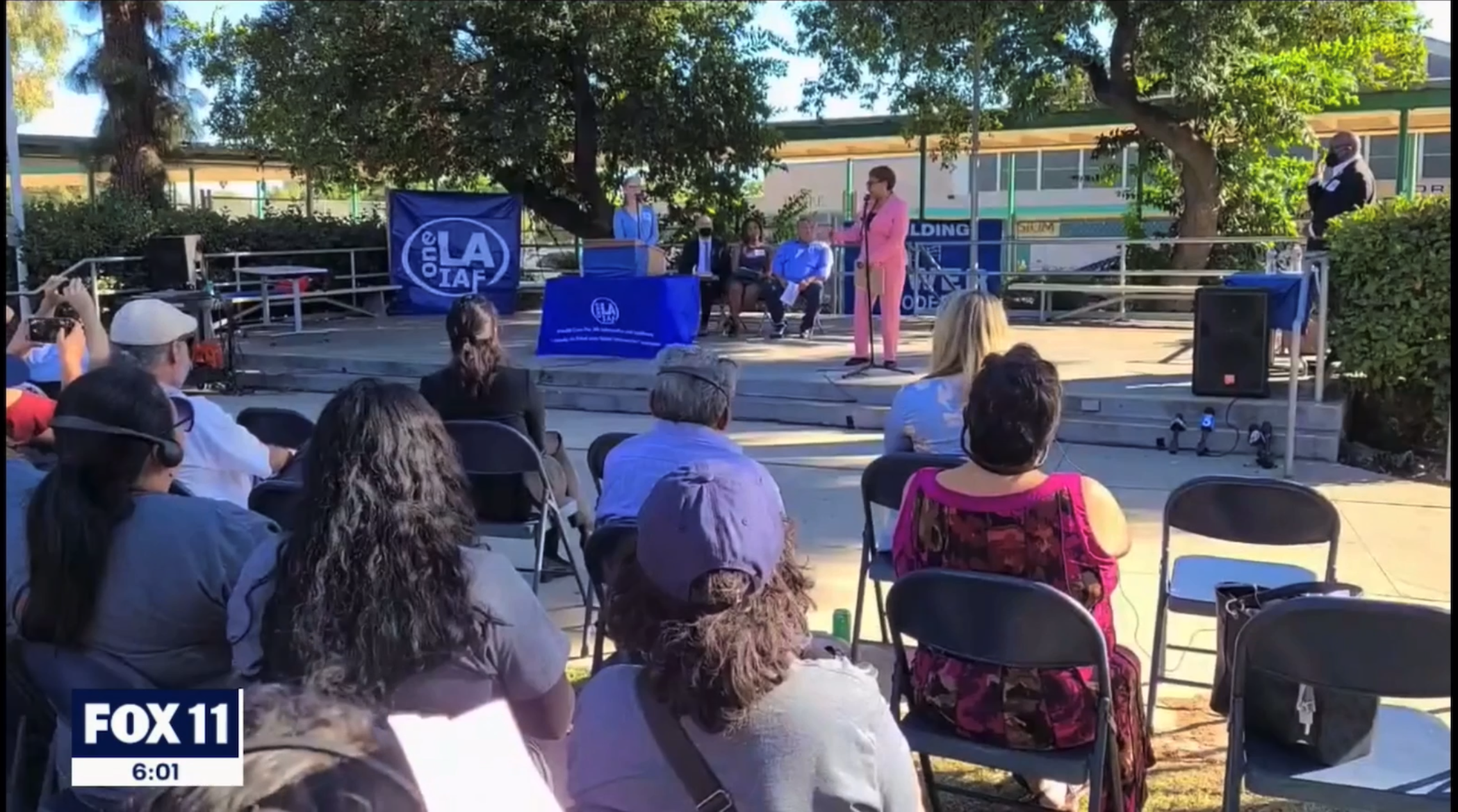 Mary Jackson, St. Brigid Catholic Church, shared the effects felt in her entire family by the lack of mental health care access, “When we invest in individuals with mental illness, we help not just that individual- but their families and their communities. By helping these vulnerable members of our society, we will make Los Angeles County more safe and livable for all.” Despite consistent promises to provide community mental health treatment options, there is a persistent shortage in mental health beds for short-term acute, sub-acute, and longer-term patients. Families in Los Angeles struggle to find adequate mental healthcare treatment options and worry that without support their loved ones either end up in jail or homeless. Conversations between One LA leaders, providers, and experts point to the inflexibility of County funding as a barrier preventing providers from nimbly delivering services that can address the severity of the needs for mental healthcare treatment.

Representative Karen Bass, Candidate for Mayor, affirmed her desire to work with One LA, “I can’t succeed without your participation. I love One LA and the diversity reflected today.” She agreed to work with One LA to promote affordable housing on publicly owned land and increase access to mental health and agreed to meet within the first 100 days of her administration.

West Hollywood Councilmember and District 3 Supervisorial Candidate Lindsey Horvath expressed her desire to work with One LA and suggested that the next meeting take place sooner than 100 days.

State Senator Bob Hertzberg and Supervisor District 3 candidate agreed to work with One LA on the issues of affordable housing and mental health, keeping track of his own commitments in a journal while on stage.

Throughout the meeting local leaders then shared stories about the issues they and their communities are facing. A former educator shared the bureaucratic barriers providers face when applying to county mental health service funds and a Black mother and veteran shared how her family was priced out of their rental home in Jefferson Park. Each candidate was then given the same amount of time to answer questions related to the issue agenda.

“We know that our democracy does not stop after November 8th. That is why we will be following up with all elected officials and ensure that we keep this conversation moving forward. We are working together to better our cities and county and make our government work for and with us,” declared Christine Walters from Community United Methodist Church.