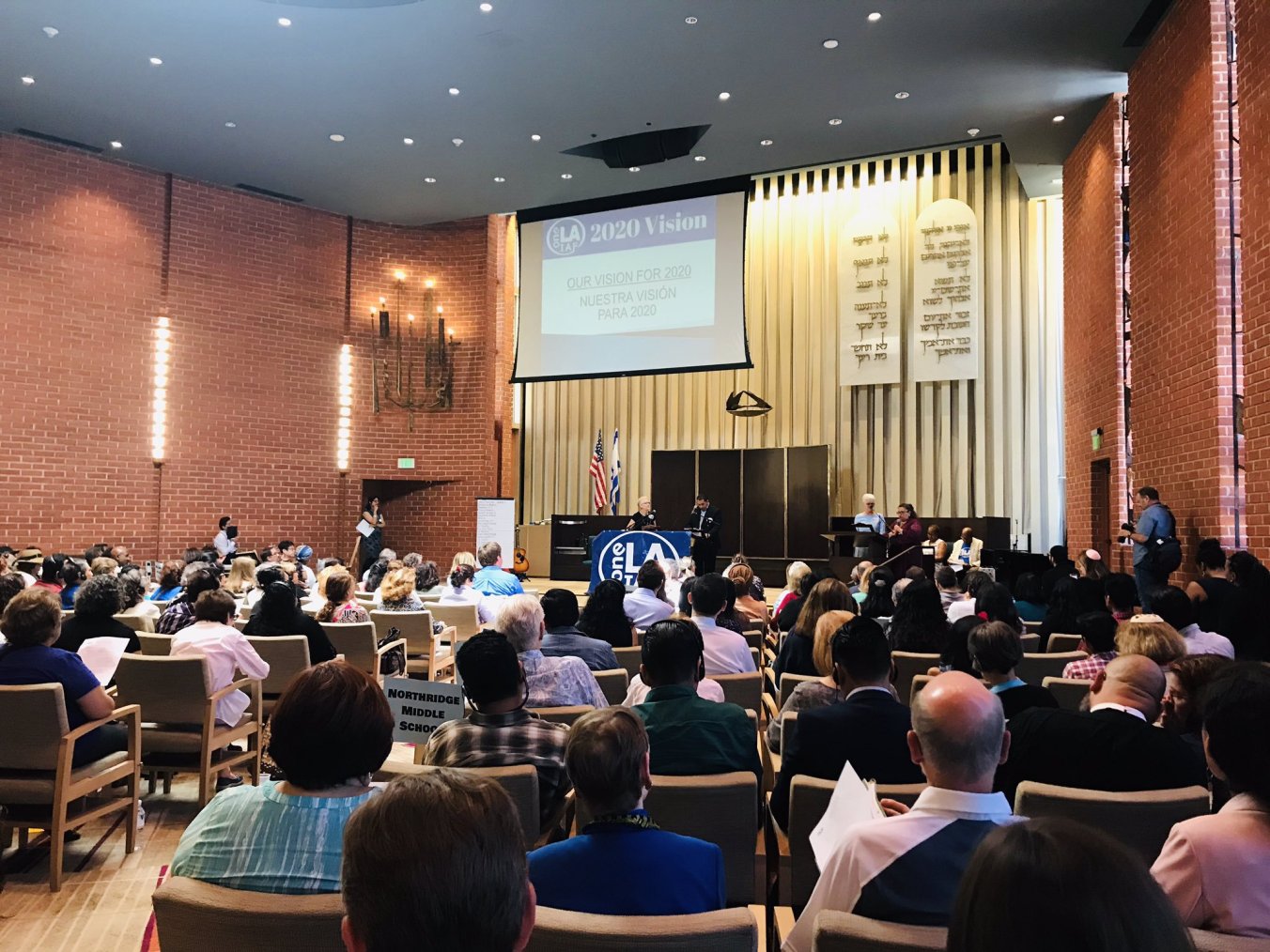 There are times when we get so caught up in changing this world from what it is to what it should be we lose sight of where we are going.

Several years back with the passing of the ACA, or Obamacare to some, health care was on everyone’s agenda. One LA-IAF put much effort into training people to enroll the low income and immigrant population into a health care plan that the county of Los Angeles would provide. Access to their own medical home was not just in their self-interest, but in my self-interest as well. Fewer people ending up in an emergency room would mean my insurance premiums would not rise. I, like many others, shared in the cost to treat the uninsured.  Seeing a doctor in a clinic near your home could mean lower premiums for us all. So, with the help of some soft money, money with strings attached, we trained our leaders and organized events where we enrolled over 140,000 Angelino’s in their own parishes or schools into the My Health LA program. This felt good to us and was good for Los Angeles County.

But with this huge success came the realization that we were neglecting ourselves. Folks burned out. We were not recruiting new member institutions. My core team grew smaller and smaller. I needed help to take on the next challenge.

California has a budget the size of the 5th largest country in the world. Los Angeles County has over 10 million inhabitants. This is about the size of the 7th largest state in the United States. Every day I witness the extravagance of the wealthy and the despair of so many others. Don’t get me wrong. Life can be wonderful in sunny California. But I feel my heart ache every day as I look around my city. With this population the budget for the county of Los Angeles is over 30 Billion dollars. If I want to help bring people to the table to better their lives I have to be in conversation with them and the people who make the money spending decisions. But to get a place at the table it takes the work of Institutional Organizing. I need to be trained to have those relational conversations that build power, help recruit new institutions, and continue creating the change my neighbors and I deserve. The soft money we had to bring access to health care to thousands couldn’t help us hire talented new organizers. Only the hard money, dues from our institutions or money raised could make that happen.

Back to Basics (Why all organizing is disorganizing and re-organizing)

As we struggled along for a few years we were still able to win some victories. We focused some effort on training immigrants at “Know your Rights” workshops.

We held civic academies and formed an alliance with the LAPD to fight sex trafficking. We formed a team of leaders to strategize about these new challenges.  But we were becoming more of an issue-based organization, not one that could build relational power. Every time a discussion of money came up at our strategy team meeting, there was silence. Why was it so hard to talk about money?  We all knew that we needed it. But I never thought of myself as a fundraiser. ‘I’m just not good at asking for money’, said that little voice in my head. Talking about money is not the kind of conversation to have when there are so many other challenges ahead. Wasn’t that the job of the “professional” organizer? I remember seeing folks looking at each other as if the person on your left or right was going to take on the job of raising money. ‘Thank goodness it didn’t have to be me.’

But the more agitated I became, the more I felt something had to change within me. If I was to be the leader I wanted to be, I had to own the task. I had to ensure that this huge place called Los Angeles and One LA had the organizers we needed to really get at the table and stay at the table. I wanted to develop a new core team in my institution. I wanted power.

Fortunately, a couple of very talented IAF organizers, with the help of Ernesto Cortes Jr., decided to join with us in Los Angeles. With some guidance and the help of one of our institutional leaders who had experience raising money we formed a small group of leaders who were ready to take on this challenge. I jumped in. As the work around the community continued we began to have quarterly delegate assemblies. Core team leaders from all of our institutions came to ratify our plans to put out a vision for the future and to set a goal to raise $50,000. Our effort paid off and we reached that goal by the end of last year.

If our vision for 2020 was to become a reality: taking on immigration; doing more know your rights workshops for hundreds of people; getting city money for legal representation for victims of illegal eviction; tackling the homeless crisis; working with the LA County Department of Mental Health to include mental health benefits for My Health LA recipients; or partnering with the city attorney and LAPD to work to end sex trafficking, we had to focus our work on recruitment and the raising of hard money. Hard money has no strings attached.

We decided to focus our action on July 21, 2019 on ourselves. With every action there is a reaction. Every institution had to reflect on raising money and recruitment if we wanted to get down to business. Two months before the action we scheduled planning sessions so we were prepared to bring the institutions together to caucus. Decisions were made in the room about dues commitments, ways to raise additional monies, and new institutions to recruit. The public business that got done was personal. We also strengthened relationships with two elected officials who are likely to run for mayor of Los Angeles and one of the LA County Supervisor seats that will be vacant next year. Remember that 30 Billion-dollar county budget? It is going to take our money to build the power to negotiate for some of that money.

I am energized and focused on the work I must do. It feels good to say I share these feelings with my partners in One LA. In 2020 we will see more clearly. 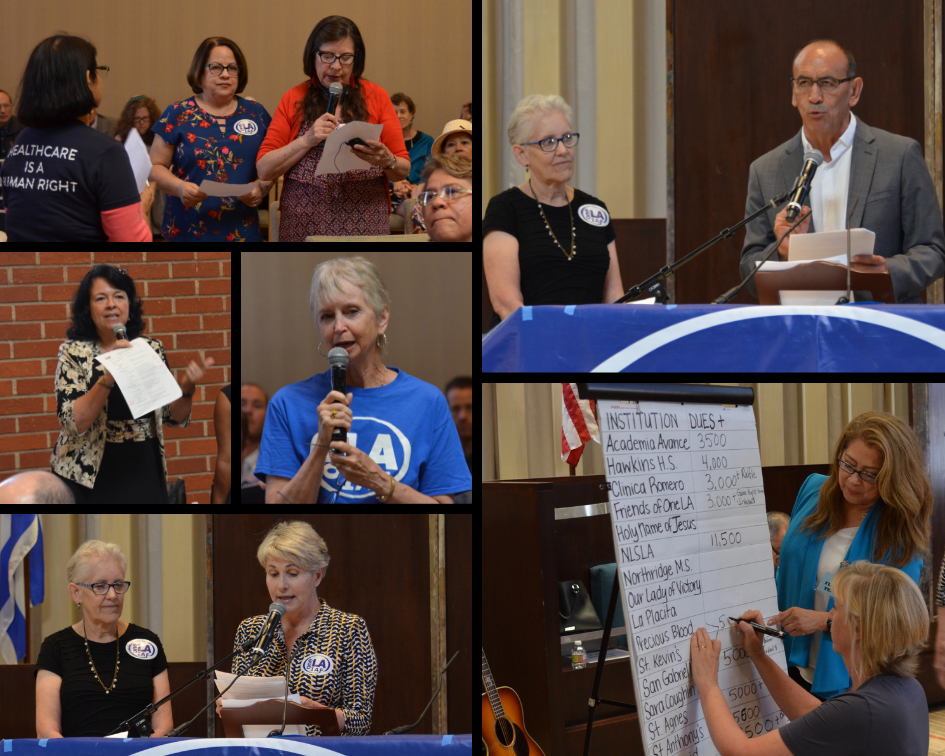 One LA Leaders teach the importance of hard money, and pledge their commitments for raising hard money through dues pledges and an investment campaign. ~ July 21, 2019