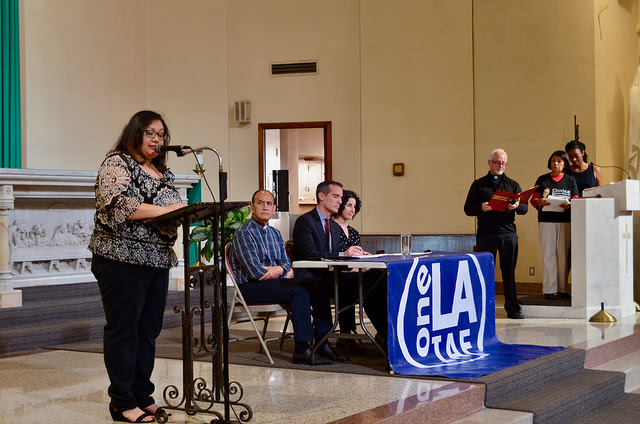 500 One LA-IAF leaders assembled with Los Angeles Mayor Eric Garcetti to discuss implementation of the recently passed linkage fee for affordable housing at St. Agnes Catholic Church, and to report on what is happening in their neighborhoods.  Representing the first community organization with which the Mayor met, leaders won his commitment to more deeply collaborate with the organization in the next few months. 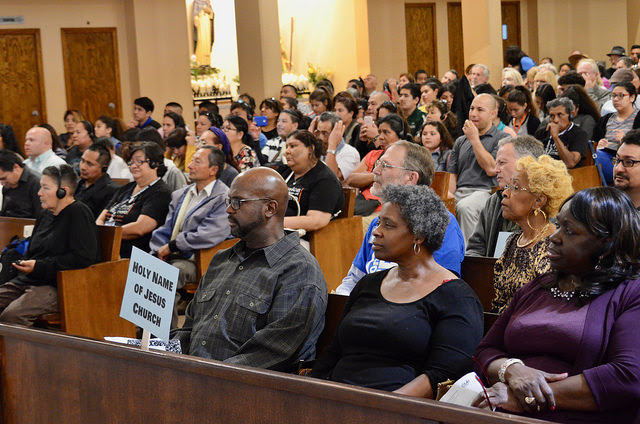 Said Fr. David Matz of St. Agnes Catholic, “All of us can see that homelessness is increasing.  But, hidden beneath the surface is a growing affordability crisis that affects millions more.”  Debra Silverman of Temple Isaiah in West LA argued, “I want my community to reflect the diversity of Los Angeles.  I want to live in a neighborhood open to all, even if they cannot afford market-value housing….And I know a lot of my neighbors feel the same way.”

Last December, the Los Angeles City Council passed a linkage fee on new development, projected to generate $100 million per year for the City of Los Angeles’ affordable housing trust fund. The linkage fee was a major focus of leaders’ engagement with Mayor Garcetti at the One LA Delegates Assembly in July 2017, and its implementation was a focus of this one.

One LA pledged to organize listening sessions with City Councilmembers in the San Fernando Valley, Downtown, West LA and South LA to shape the implementation of the linkage fee during the next few months.  Leaders also won a commitment from the mayor to include La Placita leaders in planning meetings for a new pilot project that will make on-site social and mental health services available to people staying in City short-term housing.

The Mayor pledged to meet with One LA in three months to hear concrete proposals that emerge from the listening sessions, and to continuing to work with One LA to identify opportunities for more affordable housing construction.